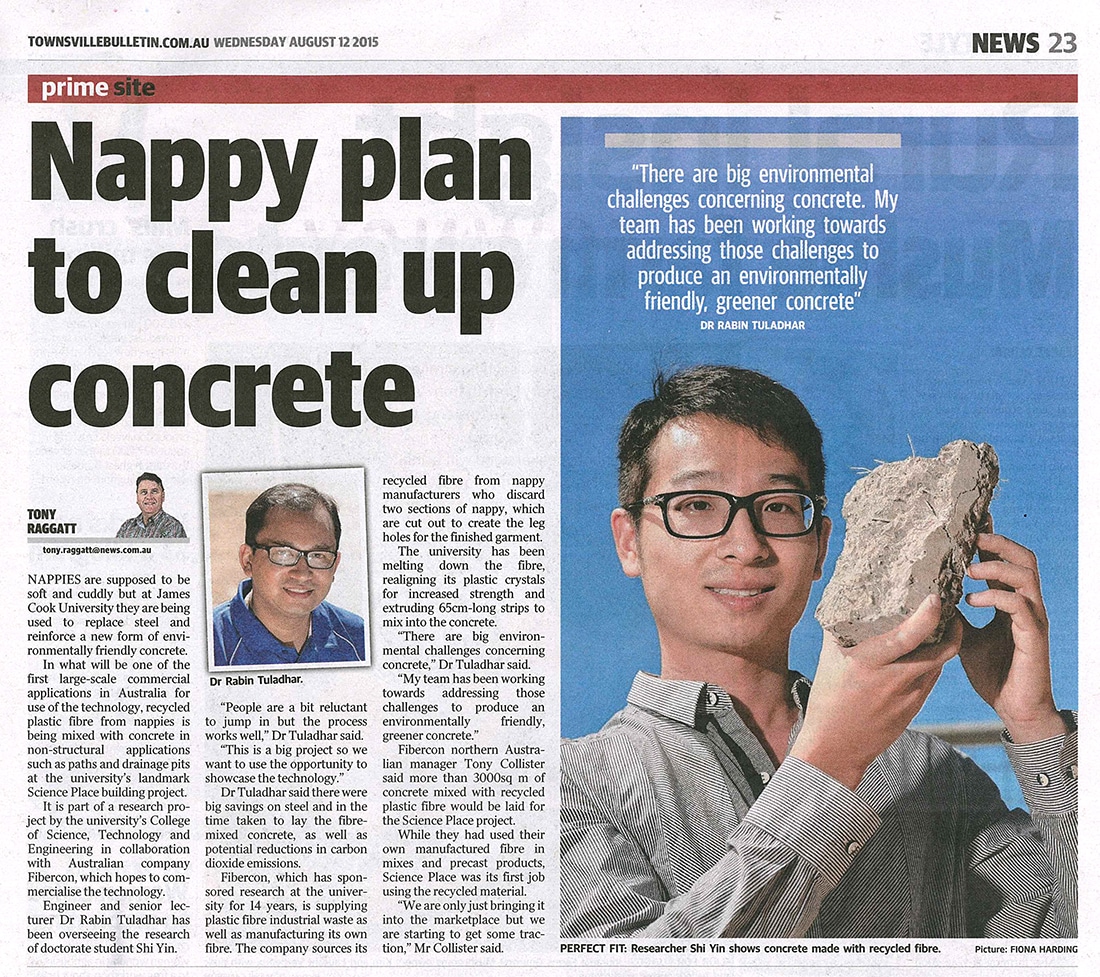 Fibercon has been working with James Cook University (JCU) for more than a decade to investigate ways in which concrete production can be made more environmentally sustainable.

More than 25 million cubic meters of concrete is poured in Australia every year. The production of cement for use in concrete produces 900kg of CO2 for every tonne of cement and accounts for 5% of total annual global CO2 production.

However, the scientific challenge has been producing a “greener” solution that doesn’t compromise technical performance or add significant costs.

The use of virgin plastic fibres in concrete began more than 10 years ago, but it was Fibercon’s Dr Shi Yin who put forward a PhD project with JCU that looked at the implications of using 100% recycled plastic fibres.

Dr Yin’s research started in 2012 experimenting with creating 40 to 50 mm long plastic fibres for disbursement in concrete. Different plastic industrial waste was tried including that recycled from curbside bins, before settling on recycled polypropylene plastics used commonly in packaging.

The technical performance of the plastic fibre concrete was tested extensively in acidic and alkaline environments as well as an independently assessed live 100-metre footpath project.

A career carved in concrete

As a young man, Tony Collister worked with traditional Italian concreters in Melbourne.

Technically proficient with an almost artisan pride in their work, Tony says the exacting standards of these men were uncompromising and provided an education he has never forgotten.

While there was no official apprenticeship in concreting, Tony feels his training was akin to one. Certainly the Italians have a proud tradition with concrete. The word comes from the Latin word “concretus” meaning compact or condensed and the world’s most famous concrete structures include the Colosseum and the Roman Pantheon.

As Fibercon’s Research and Development Manager, Tony brings a wealth of knowledge developed over many years starting with those early years in Melbourne as a “tradie”.

Tony has worked as a concrete producer, a steel fibre specialist and is currently the Chair of the Concrete Institute of Australia’s North Queensland Regional Committee.

Tony joined Fibercon in 1999 and remains its Northern Australia Manager as well as heading up R&D. Fibercon’s sponsorship of research at JCU has seen Tony involved in the scientific future of concrete for 13 years. He has personally mentored engineering students since 2002 and been involved with a number of thesis projects covering different aspects of concrete.

Most recently, Tony has worked with Dr Shi Yin during his PhD research into using 100% recycled plastic fibres instead of virgin plastic fibres to create a superior concrete that is far friendlier to the environment. The result is Fibercon’s Emesh product.

“Concrete is the most used building material on the planet – the sheer amount of it being used requires us to continually find better ways to create a superior product that is also better for the environment,” Tony says.

He’s excited that Emesh’s technical and environmental credentials have exceeded expectations and passed the exacting standards required to be the subject of articles in prestigious international publications, The Journal of Cleaner Production and Building Materials Journal.

“The use of plastic fibres in concrete has been around for a long time as its benefits for technical performance are well established but this new product is the first time 100% plastic fibres have ever been used,” Tony says.

“The technical performance of Emesh is first rate. The PhD research put Emesh through a large number of chemical tests to ensure its abilities in acid and alkaline environments as well as its durability and strength. Testing shows it does not degrade and delivers a strong post cracking performance.

“We are really championing this product and will do so over the years to promote the hands-on examples of its use and really spread the word about its benefits to those wanting to deliver a superior job.”

“At Fibercon we have never had to replace a cubic metre of concrete.  We pride ourselves on the end result exceeding expectations that make our customers look good to their customers,” he says.

“The best thing about Emesh is it offers so many extra benefits without any extra cost. Architects are particularly excited that our product is either cost neutral or offers cost benefits compared to steel, which makes their job of including more environmentally friendly solutions in their projects much easier.

“In most cases, green products are more expensive than their conventional counterparts but that’s not the case with Emesh. There is no cost penalty.”

Emesh is fully prepared at the concrete plant where the plastic fibres are added to the cement mix and fully dispersed so it arrives at the site ready to go. There is no need for a second truck to be used to deliver steel mesh slabs to the site or for the fiddly work of cutting mesh to fit the brief and no off cuts to dispose of later.

The Emesh concrete is quick and easy to pour into place whatever the shape or curves of the job dispersing perfectly into place with no waste.

“It actually reduces costs as you don’t need to go the trouble, expense and waiting time of booking an Engineer’s Inspection to make sure the concrete is properly in place,” he says.

“However, a major benefit is it stops plastic going into landfill and is playing a role in reducing the carbon footprint of construction.

“I would love to see Emesh become readily available for domestic use for driveways, slabs for carports and garden sheds and so on. It’s such an easy product to work with and performs so well.”

As one of Australia’s most environmentally conscious tertiary educators, James Cook University has been building a five-star green-rated building. In consultation with the Engineer OPUS and Contractor Lend Lease, JCU has opted to use Emesh by Fibercon to build its extensive pathways, loading docks and construction for Science Place. Construction is currently underway and expected to be completed during 2016.

Ballina to Byron: a natural selection

As the placement contractor building the Ballina to Byron Highway Bypass swale drains, Robbo’s used Emesh by Fibercon. Originally the project specified Fibercon virgin Macro Poly. Lend Lease, the head Contractor was happy to switch to Emesh. The region is known for its environmental values, which made Emesh an obvious choice. Construction began in 2013 and is expected to be completed in 2016. 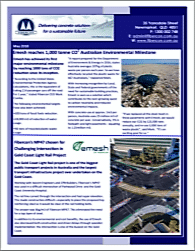 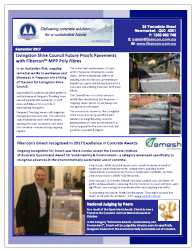